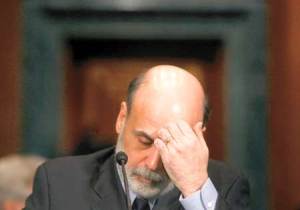 For some reason, whenever the economy has come up in the last couple of years, my typical response has been to enthusiastically shout “stagflation!” Like economist Jeffrey Sachs, I’ve been seeing a few similarities:

The similarities with the first half of the 1970s are eerie. Then as now, the world economy was growing rapidly, around 5% per year, in the lead-up to surging commodities prices. Then as now, the United States was engaged in a costly, unpopular, and unsuccessful war (Vietnam), financed by large budget deficits and foreign borrowing. The Middle East, as now, was racked by turmoil and war, notably the 1973 Arab-Israeli war. The dollar was in free fall, pushed off its strong-currency pedestal by overly expansionary U.S. monetary policy. And then as now, the surge in commodity prices was dramatic. Oil markets turned extremely tight in the early 1970s, not mainly because of the Arab oil boycott following the 1973 war, but because mounting global demand hit a limited supply. Oil prices quadrupled. Food prices also soared, fueled by strong world demand, surging fertilizer prices, and massive climate shocks, especially a powerful El Niño in 1972.

He also draws another connection:

Then as now, Dick Cheney was close to the helm. Whats more, the erroneous lessons he took away from the 1970s contribute to the problems that haunt us today. Cheney was Gerald Fords chief of staff in 1976, when soaring oil prices helped doom Fords reelection campaign. Cheney became obsessed with the fight to control the flow of Middle Eastern oil. That obsession, which by many accounts contributed to Cheneys urge to launch the Iraq war, has made the United States much more vulnerable in terms of energy, not only by tying the United States down in a disastrous military effort but also by diverting attention from a more coherent energy strategy.

It’s an interesting piece, and he does offer a suggestion or two for how we can avoid the mistakes of our last stagflation recovery. If you’re going to be influencing monetary policy for a large governing body, I highly recommend you read it. If you’re Ben Bernanke, hopefully you’re taking all of this in.