This essay is focused on political decision-making, specifically with regards to how the Obama campaign should frame McCain, but I find its arguments applicable in general:

But post-Palin, the Obama-Biden campaign seems to have become the Gore-Kerry-Hillary campaign. They are running on 18th Century theory of Enlightenment reason: If you just tell people the facts, they will follow their self-interest and reason to the right conclusion. What contemporary cognitive scientists have discovered (See my new book, The Political Mind: Why You Can’t Understand 21st Century Politics with an 18th Century Brain), and what Republican marketers have known for decades, is that the Enlightenment theory of reason doesn’t describe how people actually work. People think primarily in terms of cultural narratives, stereotypes, frames, and metaphors. That is real reason.

For me, these insights offer a potential way through stubborn beliefs many hold regarding health, medicine and science. I think there are a lot of lessons to be learned from the political successes of Republicans in the last couple of decades – and especially in the last eight years.

Taxation is not an affliction. Tax cuts will not create jobs. These are facts, but stating them as we just did just reinforces conservative frames. The right framing for the truth must be available and used for the truth be heard.

If the truth doesn’t fit the existing frame, the frame will stay in place and the truth will dissipate.

It takes time and a lot of repetition for frames to become entrenched in the very synapses of people’s brains. Moreover, they have to fit together in an overall coherent way for them to make sense.

Effective framing on a single issue must be both right and sensible. That is, it must fit into a system of frames (to be sensible) and must fit one’s moral worldview (to be right).

Not long after arriving in the Senate, Mr. Obama himself briefly provoked a controversy by flying at subsidized rates on corporate airplanes, including twice on jets owned by Archer Daniels Midland, which is the nation’s largest ethanol producer and is based in his home state.

No big surprise he won Iowa. E85 as a solution to our fuel crisis is a red herring. If Obama hasn’t heard this yet, it’s because he has corn-money stuffed in his hears. If he’s elected, keep an eye on his energy policy to see if he’s making good decisions free from political influence. Our food prices and environment depend on E85 getting shot down, as it should. 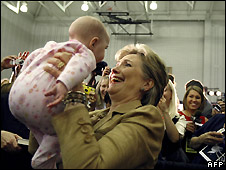 Speaking in Indiana, Mrs Clinton said she had no regrets about promising to “totally obliterate” Iran if it attacked Israel with nuclear weapons – a scenario that was put to her two weeks ago.

“Why would I have any regrets?” she asked on ABC television.

Orac has a nice rejoinder to David Kirby’s recent article, which contained the following disheartening, if not unsurprising news:

Senator Hillary Clinton, in response to a questionnaire from the autism activist group A-CHAMP, wrote that she was “Committed to make investments to find the causes of autism, including possible environmental causes like vaccines.” And when asked if she would support a study of vaccinated vs. unvaccinated children, she said: “Yes. We don’t know what, if any, kind of link there is between vaccines and autism – but we should find out.”And now, yesterday, at a rally in Pennsylvania, Barack Obama had this rather surprising thing to say:

“We’ve seen just a skyrocketing autism rate. Some people are suspicious that it’s connected to the vaccines. This person included. The science right now is inconclusive, but we have to research it.”

(Note: The Washington Post reports that when Obama said “this person,” he pointed to someone who had asked an autism question).

Orac contends (and I agree) that the problem isn’t the answers themselves, but rather that they answered at all (his notes and links, not mine):

In essence, both candidates accepted some of the major pillars of the mercury militia’s fantasies as being true. These include claims that:

And of course, John McCain is even worse.

It’s like a brief history of US economics, a nice refresher course for those of us who have forgotten a lot since college. I do like that he opened with a quote from Alexander Hamilton and speaks in-depth with apparent subject knowledge, rather than superficially with sound bites (though he does throw in a few one-liners for good measure – he’s a politician, not a professor, after all). I feel I may be warming up to this Obama fellow; still, rhetoric is one thing, and policy decisions are another.

The great task before our founders was putting into practice the ideal that government could simultaneously serve liberty and advance the common good. For Alexander Hamilton, the young secretary of the treasury, that task was bound to the vigor of the American economy. Hamilton had a strong belief in the power of the market, but he balanced that belief with a conviction that human enterprise, and I quote, “may be beneficially stimulated by prudent aids and encouragements on the part of the government.” Government, he believed, had an important role to play in advancing our common prosperity. So he nationalized the state Revolutionary War debts, weaving together the economies of the states and creating an American system of credit and capital markets.

You can watch the video of the speech here, or read the transcript here.

Hey listen, I love you guys but I want to take you to task if I may, respectfully, for a moment. I have been watching the show since 6:00 this morning when I got up, and it seems to me that two hours of Obama bashing on this typical white person remark is somewhat excessive and frankly I think you’re somewhat distorting what Obama had to say.

(There’s a video of the exchange at the above link.) I’m honestly just surprised that anyone at Fox News has a conscience at all. Bravo, Mr. Wallace; you may have found a tiny speck of journalistic integrity. Hold on to it! Don’t let Rupert take it away! This was also pretty nice of him:

Far be it for me to be a spokesman for the Obama campaign, and I will tell you that they would laugh at that characterization, but you know, the fact is that after giving a speech on race earlier this week, on Tuesday, he gave a major speech on Iraq on Wednesday and a major speech on the economy yesterday. And so, I think they would say that in terms of deflecting attention away from the issues people really want to hear about, maybe it’s the media doing it, not Barack Obama.

This is a really interesting article in the Washington Post on the challenges women face all the way from the board room to the White House:

In my remarks to the business group, I noted that it’s common for women to use “we” to be inclusive and to avoid sounding self-promoting when they believe it’s obvious that they’re referring to work they did themselves. A woman in the audience spoke up: “That’s exactly right,” she said. “I presented my work using ‘we’ and was told: ‘You’re not being managerial. You have to own the work you’ve done.’ ” But her experience also illustrated the double bind. “So I started saying ‘I,’ ” she went on, “and my colleagues started saying, ‘She’s not as great as she thinks she is.’ “

We think we’re judging people as individuals, but gender is like a contact lens permanently affixed to the eye. As the philosopher Ludwig Wittgenstein put it, “One thinks that one is tracing the outline of the thing’s nature over and over again, and one is merely tracing round the frame through which we look at it.” Gender is a frame through which we look at people — and what we see reflects that frame.

I think the author makes some pretty good points about how we view Clinton through a ‘frame’ of sorts:

Women’s status as wives is such a huge part of our image of them that it tends to obscure other roles, while a man’s marital status is left in the background. This might explain why we hear so many references to Clinton’s position as first lady rather than her eight years in the Senate, where, as political scientist Norman Ornstein put it to me, “she has been without question one of the most effective senators.” For example, he noted, “on Armed Services, she dug in, developed relationships with all the best generals and other brass, and learned defense inside out.” And why do we keep hearing about her efforts to ensure universal health care in 1993, rather than her many senatorial successes on the issue, such as a bill she introduced in 2003 to make sure that drugs marketed for children have been tested on children, or her success in securing health benefits for National Guard and Reserve members who served in Iraq?

Not that I’m a Clinton supporter, but I did think it was interesting that I haven’t really heard much about these successes of hers in the Senate. Although I’m not totally convinced that’s due to gender; I haven’t really heard much about Obama’s accomplishments, either. It may be more due to a lack of interest from the public, a lack of effort from the media, and a general opinion that personality is more important than deeds in politics – unless, of course, those deeds are salacious; then we become very interested and those deeds are suddenly very important. That notwithstanding, I’m sure gender issues do factor into this election, and as the author points out, it’s important to keep that in mind when evaluating candidates.

Mike Huckabee, when asked if he’d be running for the Senate:

I find myself consistently agreeing with Kucinich – far more than any other candidate.

There are more videos where he answers readers’ questions at the BigThink site. Pretty cool site.

Because what we don’t need more of is ridiculous, chest-thumping rhetoric:

Asked whether the American commanders on the scene were right in not attacking the Iranian boats, Mr Huckabee said he backed their decisions, before warning Iran: “Be prepared, first, to put your sights on the American vessel. And then be prepared that the next thing you see will be the gates of Hell, because that is exactly what you will see after that.”

Fred Thompson, the former Tennessee senator and Law & Order star who is banking all on victory in South Carolina to revive his campaign, said of the Iranian boat crews: “I think one more step and they would have been introduced to those virgins that they’re looking forward to seeing.” The crowd cheered.