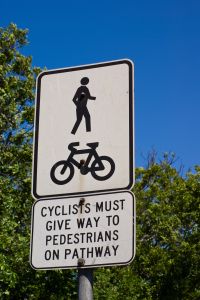 I’ve been pondering a new workout regimen (i.e., one at all), and I thought I’d just start up with the usual – running early in the morning. The problem with that is waking up and dragging myself out of bed early enough to give me time to run, shower, and get to work. It hasn’t gone well this week. So instead, I’m considering biking to work every day, since home is only about 3.5-4 miles from the office. But I wanted to be sure I was getting the same amount of exercise, so I did some Googling.

Dr. Edward Coyle of the University of Texas determined average values of oxygen consumption by cyclists to develop a table to estimate the approximate caloric equivalence between running and cycling.

Dr. Coyle made the calculations easy by providing conversion factors for different riding speeds: 10MPH=4.2, 15MPH=3.5, 20MPH=2.9, 25MPH=2.3, and 30MPH=1.9. Divide the number of miles ridden by the conversion factor for your riding speed to tell you the equivalent miles of running at any speed.

I’ve made the trek before, and it usually takes me a little more than 15 minutes, so I’m going to assume an average riding speed of 15mph. If my math is correct, I’ll probably do the equivalent of about 2 miles of running per day if I consider my round trip. That’s probably more than I’d get if I forced myself to try to run every day, it saves gas, it’s zero-emissions, plus it’s easier on the joints and more time-efficient for me. I’m just going to have to be a little sweaty at work, I guess.

5 thoughts on “Running vs. Cycling”